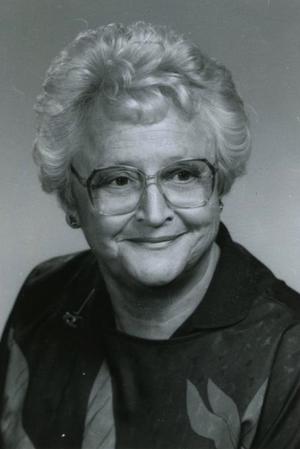 Our beloved friend and co-founder of Soroptimist House of Hope, E. Brigitte Lange Page, passed away of natural causes at her home in Banning on December 3, 2013.

E. Brigitte Lange, known by her friends and loved ones as Brigitte, was born in Berlin, Germany on September 16, 1924. Growing up in Germany while Hitler came into power in 1933, Brigitte and her family lived in terror because of her mother’s Jewish heritage. Unable to attend college, because the Nazis considered her “non-human”, she entered business school. She became fluent in several languages and was proficient in accounting, typing and shorthand. She worked in the Japanese Embassy as a translator. After World War II, she got a job at the American Embassy in Berlin, and in the summer of 1946, she met her husband of 58 years, a “crazy” America as she describes, Lt. Wilbur (Bill) E. Page, in the 252nd Army Corps Engineers.

Brigitte came to America on September 9, 1947 on a War Bride quota, as the bride of Lt. Page. They lived in upper New York State, where she worked for General Electric until 1957, when Bill’s health required them to move to a warmer climate.

After moving to Banning from New York, Brigitte showed no signs of slowing down. She was co-owner and business manager of Page Auto Exchange/Page Datsun, which she and Bill began in 1957. They sold the business in 1979. In addition, Page wrote a column in Banning’s local community newspaper, Record Gazette, for nearly 25 years, called “Brigitte’s Corner”. In 1976, Brigitte became Banning’s first woman Mayor after being elected to City council from 1975-1984. She was elected by the council to serve as mayor again 1982. She was also the first woman President of the Riverside County Mayor’s and Councilmen’s Conference in April 1980. Brigitte was an example of a wonderful leader who’s commitment and work made a direct impact in her community.

Brigitte contributed her time and heart to a numerous amount of organizations serving titles such as President, Director, Treasurer, Fiscal Officer, and Director Emeritus. In addition, she received over a dozen awards and recognition. Above all, the contributions closest to her heart and that she found the most rewarding where the Soroptimist International, an organization of women helping women, and Soroptimist House of Hope, a recovery home for women with alcohol and chemical dependency in Desert Hot Springs, which she co-founded in1981. Brigitte is also credited as the founder of the former San Gorgonio Childcare Consortium, and established the San Gorgonio Hospital Foundation.

For more information regarding memorial services and further details on the life of E. “Brigitte” Lange Page, please visit the following link for an article written in detail on her heartwarming escapades http://www.recordgazette.net/news/article_6c5bbaec-684b-547a-b1e0-d0d40d4fa18d.html